The short version of this is that according to real scientific research in both burning calories and muscle building intensity trumps duration. If you do the 1 minute of high intensity exercise you metabolism continues to burn calories for up to 36 hours, even while you sleep. If you do high intensity weight lifting your body can take from 3 days to 15 days or more to recover and build muscle before you should do try to build again. If you check the medical white papers on these you will start to understand why. The videos are the easy way to learn the basics.

This is the text from a great 1 hour BBC Horizon Truth about Exercise show.  See this also Medical Study How To Get Fit With 3 Minutes Of Exercise A Week: BBC Doc Tries “HIT” New research revealed on a BBC TV Horizon program broadcast in February 2012, suggests it is possible to improve some measures of fitness with just 3 minutes of exercise a week. Medical journalist Dr Michael Mosley, like many people, is not a great fan of exercise for its own sake, and set out to find how little he would need to do to get fit. And he discovered some surprising facts about health benefits of HIT, or High Intensity Training. Challenging Current Thinking “It goes against everything I was taught in medical school, and everything I have ever read since”, gasps Mosley to camera, as he completes a vigorous bout of pedaling on a stationary exercise bike while scientists look on. Mosley, who trained as a medical doctor before moving into journalism and broadcasting, introduces the one-hour program, “The Truth About Exercise”, by saying that what he discovered about exercise, thanks to the latest research, has challenged his view, and altered the way he lives his life. High Intensity Training A main theme of the TV program is High Intensity Training (HIT), where you do a number of shorts bursts of intense and effortful exercise with short recovery breaks in between. HIT is not new, but has come to prominence in recent years as more researchers have looked into and measured its health benefits. There are various forms of HIT, depending on the intensity and duration of the effortful bursts, and your fitness goals. (The HIT in this article is not to be confused with another type of workout also called HIT: a strength-training made popular in the 1970s by Arthur Jones, now practiced by many bodybuilders, where you work with weights and perform sets of repetitions to the point of momentary muscle failure.) Recent HIT research shows, for example, that doing ten one-minute sprints on a stationary exercise bike with about one minute of rest in between, three times a week, is as good for improving muscle as many hours of less strenuous conventional long-term biking. Professor Martin Gibala and his team at McMaster University, Hamilton, Ontario, Canada, carried out a study on college students,  and discovered HIT delivers the same physical benefits as traditional endurance training, even though it takes considerably less time, and surprisingly, involves doing less exercise. Types of HIT In Gibala ‘s student study, the participants had to pedal at their maximum possible effort level on a specially adapted lab bike. The thinking then was that “all out” was an important part of the HIT method. But then, in 2010, Gibala and colleagues published another study in The Journal of Physiology, where they showed how a less extreme form of HIT worked just as well for people whose doctors might be a bit worried about them adopting the “all out” method, for instance those who might be older, less fit and overweight. In that form of HIT, the workout was still beyond the comfort zone of most people (about 95% of maximal heart rate), but was only half of what might be regarded as an “all out” sprint. On the BBC program, Mosley tries a form of HIT developed by Jamie Timmons, professor of ageing biology at Birmingham University in the UK. In Timmons’ form of HIT, the bursts of high intensity are at maximum effort, but of very short duration (20 seconds at a time). Timmons told Mosley, who was doing no weekly exercise at the time, that he could expect to see improvements in a number of measures of health if he did just three minutes of HIT a week, for four weeks. 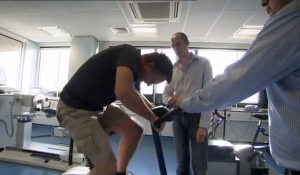 y that technological advances in genome research are moving us into an era of personalized medicine, perhaps we are also moving toward an era of personalized exercise, says Mosley. What we are learning is that the link between exercise and health is an individual thing. Methods like HIT are useful, because very quickly, without spending a lot of time and effort, you can find out what works for you, and what doesn’t, and fine-tune a program that you can fit more easily into your lifestyle. Warning A word of caution: as always, before you take up a new form exercise, if you have any medical conditions, please talk to your doctor about it first. For instance, in the case of HIT, if your doctor thinks it is OK for you to try it, be sure to discuss whether the very high or moderate intensity form is more appropriate, and be clear about the benefits you may reasonably expect. Written by Catharine Paddock PhD Copyright: Medical News Today If you want Strength Training check these.

Are you ready to shed those unwanted pounds with exercise?  Before you get started with exercising for weight loss, get the truth about these common exercise myths.

Myth 1.  Doing crunches will get rid of belly fat.

Crunches are a type of resistance training for your abdominal muscles, which means that they help build and strengthen the muscles in your stomach.  They won’t, however, get rid of the fat on top of the muscle.  Unfortunately, there’s no way to target one specific area of your body for fat loss.  If you want to lose belly fat, you need to get id of the fat all over your body and you’ll see your results proportionately.

The reality is, lifting heavier weights that you can only lift 3 times or less will create larger, stronger muscles in a shorter amount of time.  Using lighter weights to complete more reps will help you improve your muscular endurance.  Most exercise experts recommend changing up your routine to avoid your body acclimating to a routine and slowing progress.

One of the number one reasons that men or women stop exercising is boredom.  Taking fitness classes can help you stay exciting about working out, which may prevent you from quitting your fitness routine entirely.  It’s a good idea for everyone, regardless of sex, to consider adding some variety to their exercise routine with new aerobics or yoga classes that work your body in different ways.

*The Results shown are based on active and strict participation in our program. Weight loss results may vary based on individual user

Open Maps Widget for Google Maps settings to configure the Google Maps API key. The map can't work without it. This is a Google's rule that all sites must follow.

We give Federal, State, and Government Employees Discount Military, Law Enforcement, Fire Personnel, Teachers, Nurses, and Spouses receive a 10% discount on all medications, injections, and supplements.
Some Restrictions Apply.
Free Lipotropic injection for 1st time patients. $20.00 Value.*First time patients only. Must sign up for $25.00 program.* We have several in office specials designed to work with your needs. Come in and see what we can do for you. The consultation is FREE with no obligation.